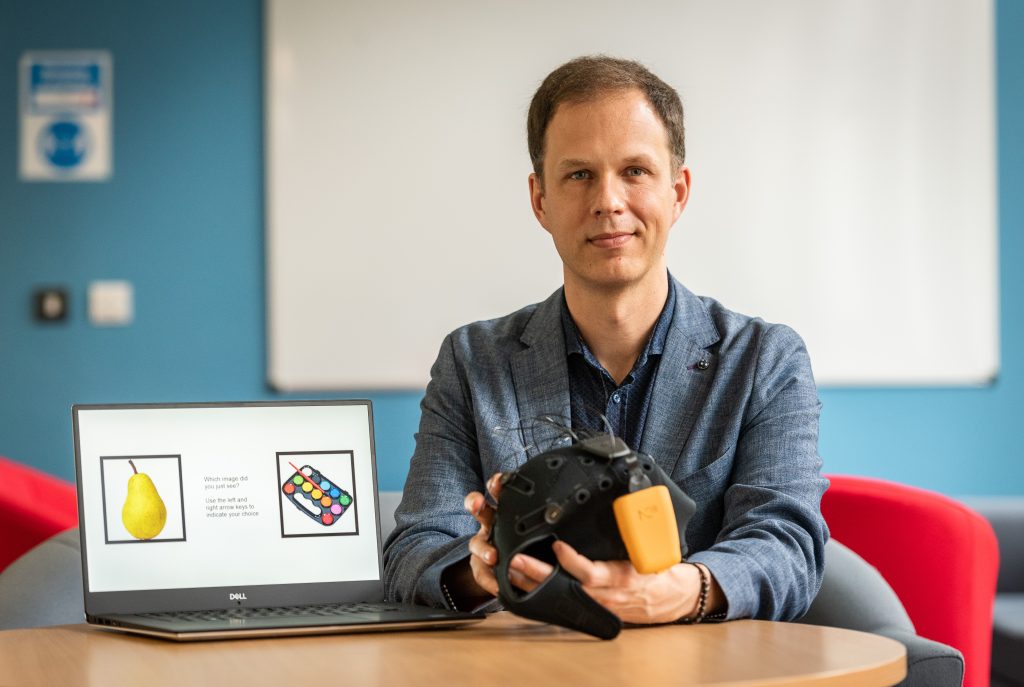 BRACE has awarded University of Bath neuroscientist, Dr George Stothart, a grant of £92,747 to help develop a pioneering new approach to detect Alzheimer’s disease and dementia.

The funding will be used to investigate whether three major types of dementia can be detected by the ‘Fastball EEG’ technology, which Dr Stothart has developed.

This is a simple, but revolutionary approach which could help significantly lower the age at which conditions such as Alzheimer’s are diagnosed. It involves participants looking at a series of flashing images on a computer screen over two minutes, whilst their brain waves are measured using an EEG cap (which uses sensors to record electrical activity / brain waves).

A breakthrough study published last September in the journal BRAIN, found that the Fastball technique was highly effective at picking up small, subtle changes in brain waves which occur when a person remembers an image. Crucially, the technique is completely passive, meaning the person doing the test doesn’t need to understand the task or respond, and may not even be aware of their memory response. The technology is both cheap and portable.

The study received international media attention when it was released.

The types of dementia being studied by Dr Stothart include frontotemporal dementia, dementia with Lewy Bodies and Vascular Dementia. Together these account for more than 250,000 dementia cases in the UK.

Researchers and campaigners recognise that dementia is often diagnosed too late, up to 20 years after the disease may have taken hold. Quicker, more accurate ways to diagnose dementia are greatly needed to better understand the disease and to develop ways to stop the damage it causes to the brain.

They hope that earlier diagnosis can allow people affected and their families to plan their future, including using lifestyle interventions such as stopping smoking and exercise which have been shown to help slow down the progress of the disease.

Commenting, Dr George Stothart at the University of Bath explained:

“This award will be instrumental in further developing Fastball to help diagnose all forms of dementia, not just Alzheimer’s disease. BRACE’s support has been invaluable to the development of Fastball and we are excited to begin this new avenue of cutting edge research.”

“We were delighted to be able to fund Dr Stothart’s first Fastball project, which has had an astonishing impact. It could result in a new diagnostic tool that transforms the prospects of vast numbers of people who are developing Alzheimer’s disease.

“BRACE is thrilled to be supporting the next phase in Dr Stothart’s research, extending the same technology to three other major forms of dementia. It shows that local research from a local charity can have a global impact.”